What is the Ethernet?

Ethernet is the technology of connecting computers and electronic devices in short distances to form a local area network (LAN). Ethernet networks may include cable connected and wirelessly connected devices.

Who invented the Ethernet?

- Check out our Copper Network Cables and Products

The first generation of Ethernet cables Category 1 (CAT1) cables, which were officially introduced around 1983, were only capable of transferring data as voice, in telephone networks. CAT1 cables consisted of only of 1 pair of isolated copper wires, and they usually had a t hick outer jacket. Category 1 cables function at a frequency from 100 KHz to 400 KHz or 1000 KHz at most, and they could only transfer voice at a theoretical 1 Megabit per second. CAT1 Ethernet cables did not mostly use connectors, they were terminated directly to phone panels. 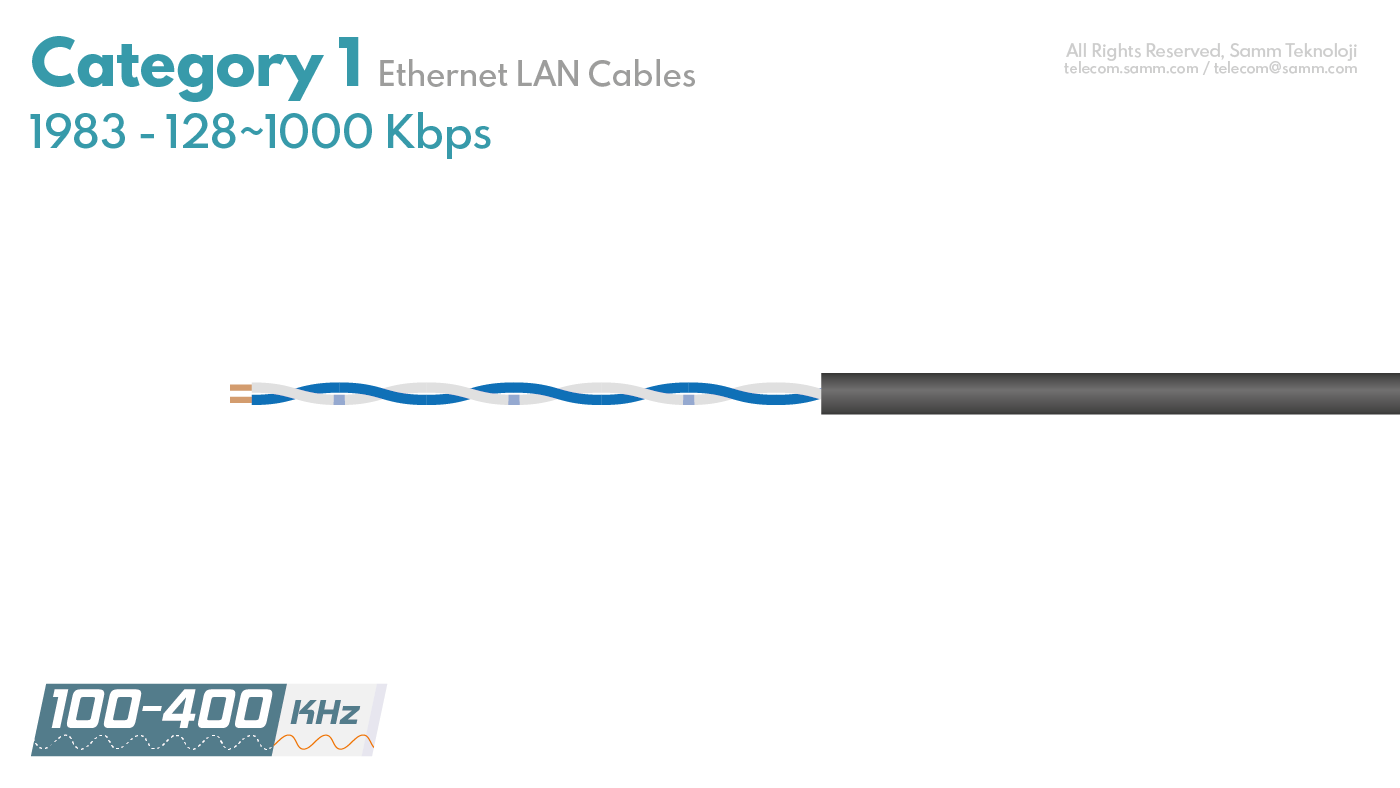 The second generation of Ethernet cables is Category 2 (CAT2), which was introduced in 1987 and first used for Token Ring networks. In telephone networks, CAT2 cables are capable of transferring data as voice signals. Category 2 (CAT2) cables consist of only of 2 pairs of isolated copper wires, and they usually have an outer jacket. Category 2 cables function at a frequency from 1 MHz to 4 MHz, and they could transfer data at a speed from 1 to 4 Megabits per second. CAT2 Ethernet cables were used with RJ11 connectors which are compatible with old voice telephones. 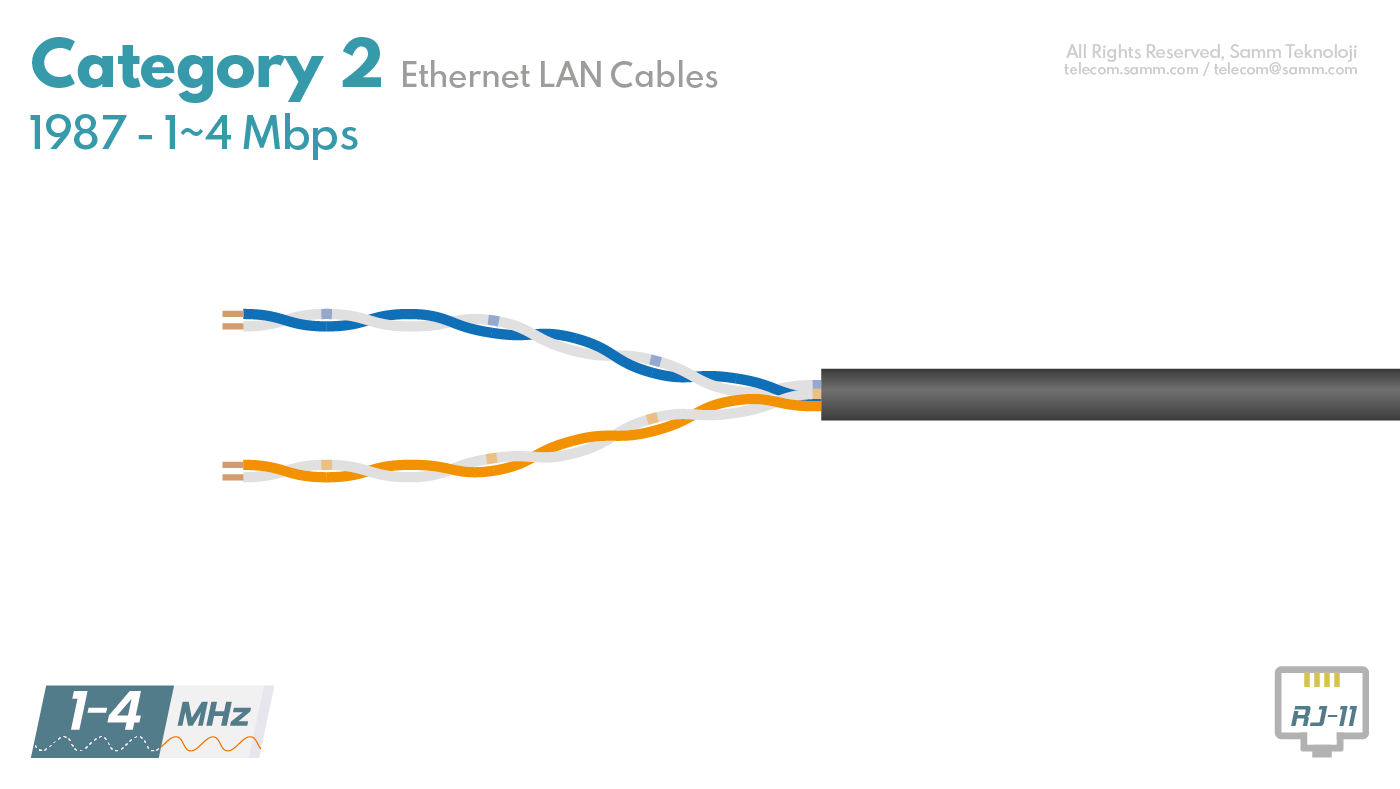 The third generation of Ethernet cables is Category 3 (CAT3). It consists of 3 pairs of isolated copper wires isolated in an outer jacket. CAT 3 Ethernet cables were first used in 1991, and they introduced the 10-BaseT Ethernet standard. Category 3 (CAT3) cable can be used with frequency up to 16 MHz, which allow for 16 Megabits per second data transfer bandwidth. However, the higher speed of CAT3 over CAT2 limited their layout distance to 100 meters, which became the standard distance for most Category cables that came after it. CAT3 Ethernet cables were used with RJ12 connectors, which are compatible with old voice telephones just like RJ11 connectors. 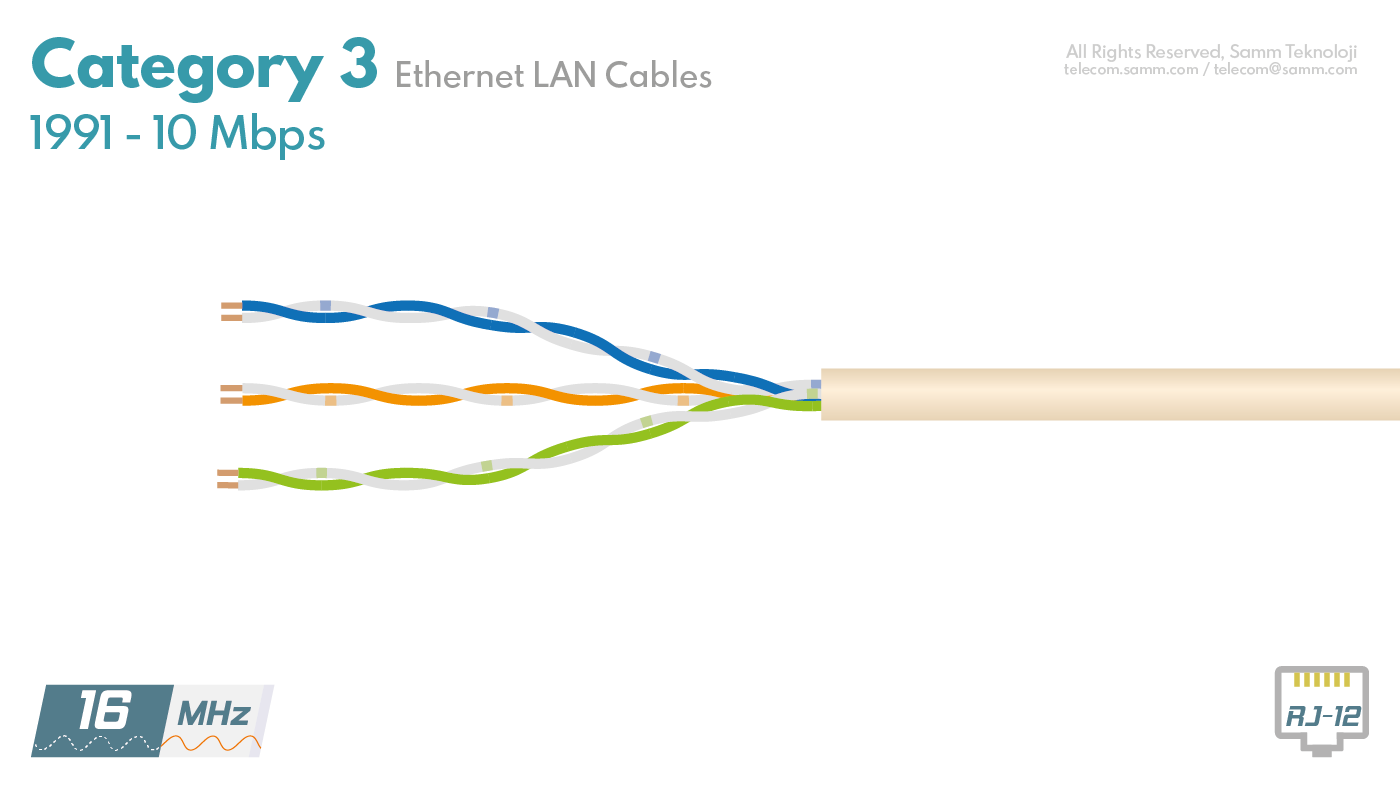 The fourth generation of Ethernet cables, Category 4 (CAT4), contained 4 pairs of isolated copper wires isolated in an outer jacket. The 4 pairs of twisted copper wires, used in CAT4, became the standard for all forthcoming CAT cables. Consequently, the CAT4 cables were the first to use the RJ45 connector in 1993, which remained the most common Ethernet network connector for many years, even today. Category 4 (CAT4) cable has a frequency range of up to 20 MHz, allowing for a data transfer capacity of 16 Megabits per second. CAT4 cables work with 10-BaseT Ethernet standard but it was also used in Token Ring networks as a successor to CAT2 cables. 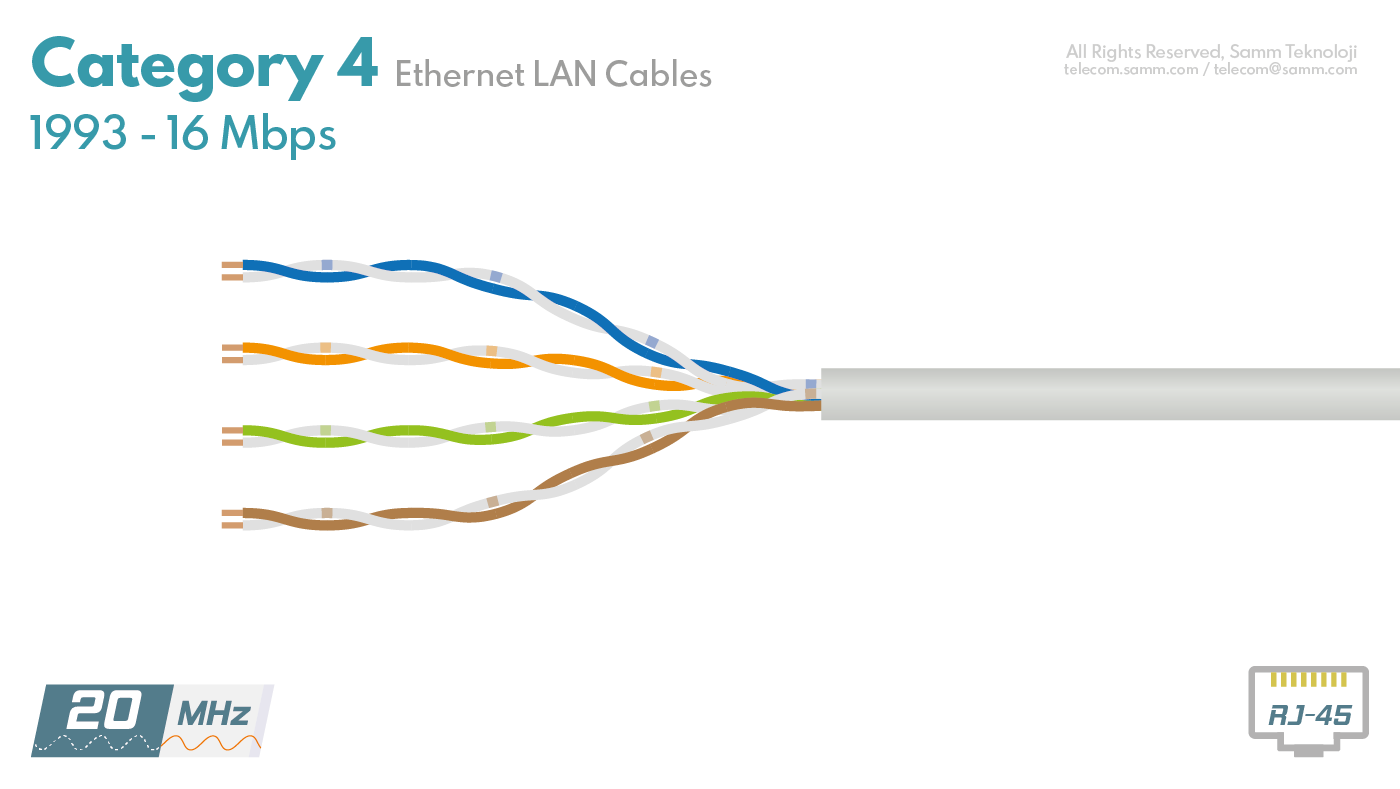 The fifth generation of Ethernet cables, Category 5 (CAT5), continued the 4 twisted pairs structure but they were the first to use the most common 100Base-T
Ethernet standard in 1995. CAT5 cables upped the signal frequency from 20 MHz to 100 MHz and they could reach 100 Megabits per second bandwidth along a 100 meters cable. The Category 5 generation came along the internet boom from 1995 till 2001, which made it the most well-known Ethernet cable standard in history. CAT5 cables are usually terminated by RJ45 connectors, as the most common standard. 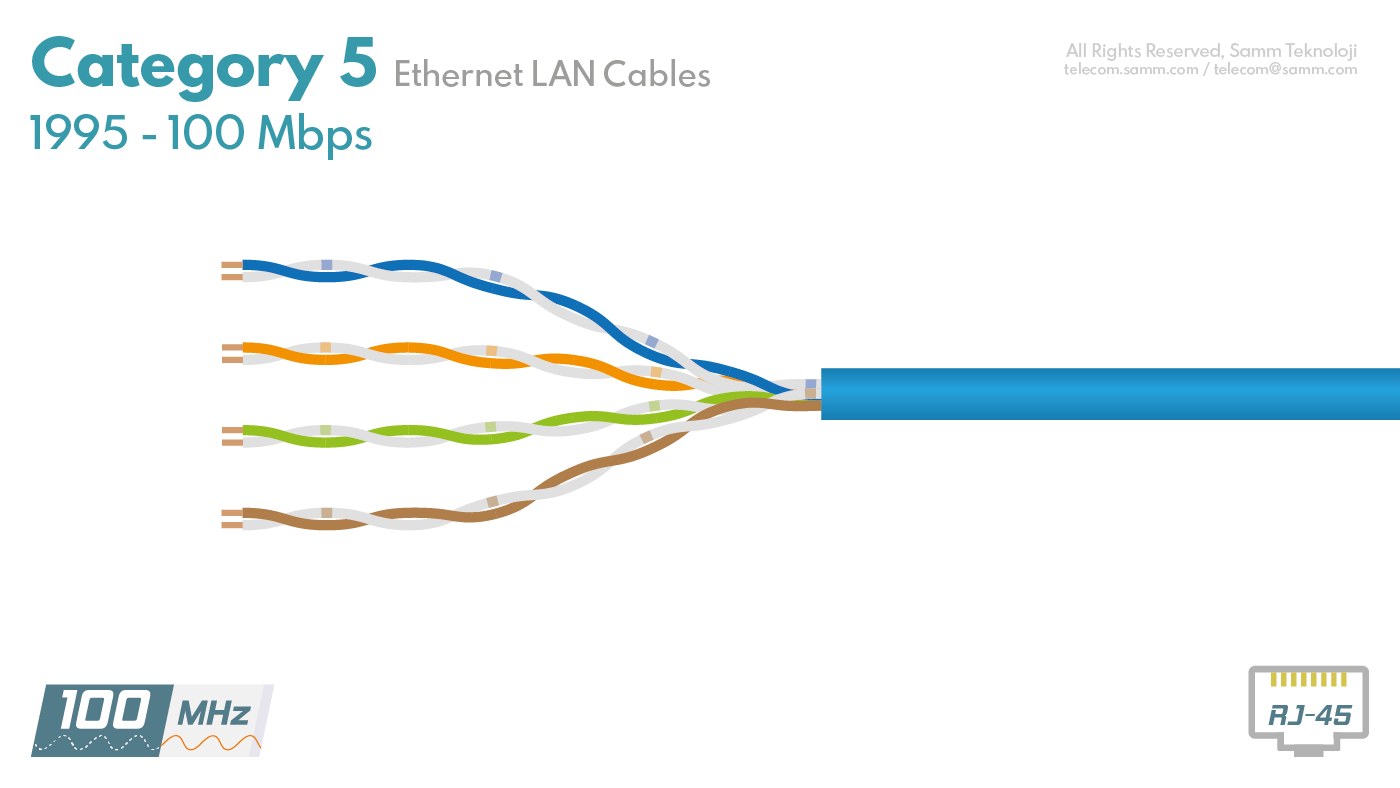 CAT5e is an improved version of CAT5, the fifth generation of Ethernet cables. In 2001, Category 5e cables were invented to increase the bandwidth 10 times over the CAT5 cable. CAT5e cables were the first to reach 1000Base-T
Ethernet standard with a 1 Gigabits per second speed bandwidth, using the same 100Mhz frequency of the CAT5. CAT5e helped technician in making larger and more complex LAN network structures, even though they had a 55 meters range only. They also used the same RJ45 connector, and contributed in making even more favoured. 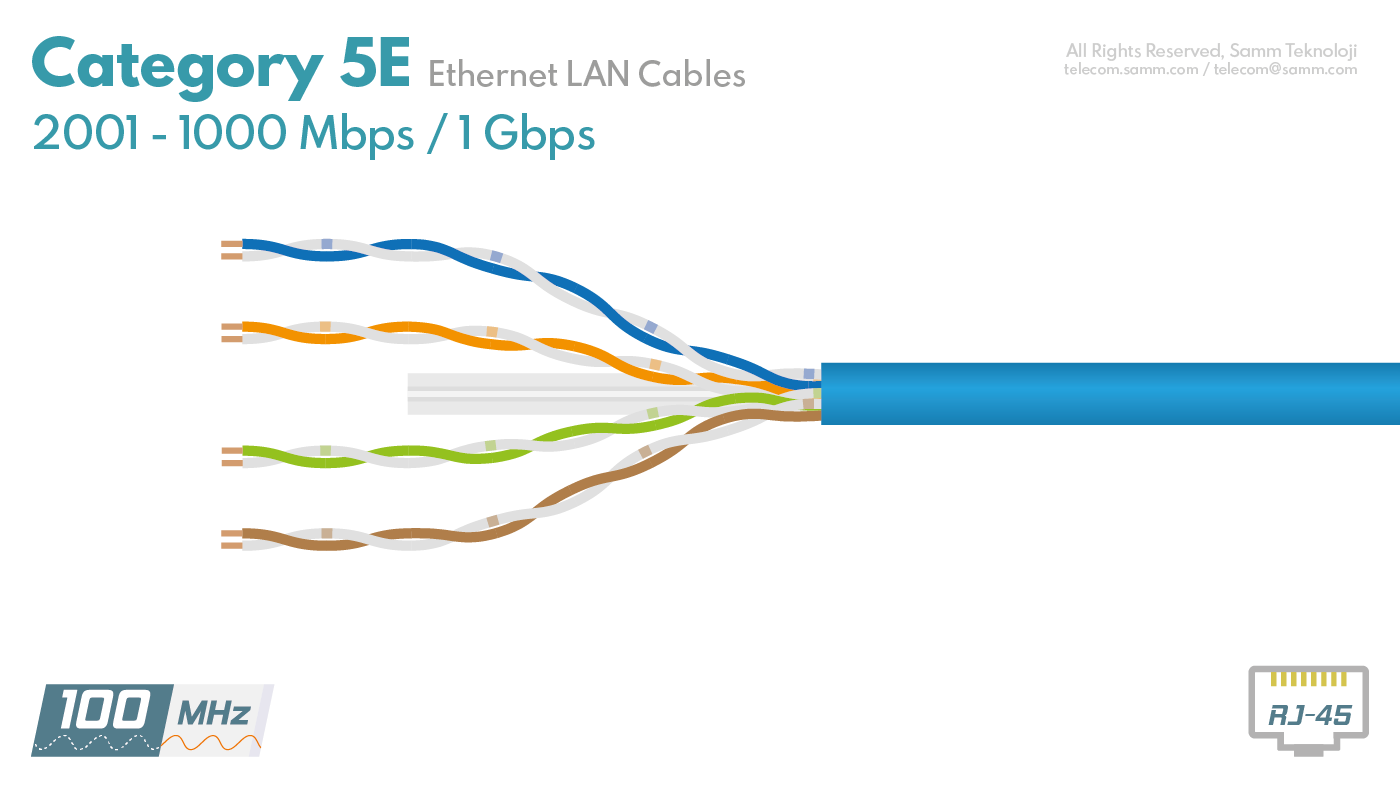 The sixth generation of Ethernet cables, Category 6 (CAT6), introduced the most crucial change in the structural design of an Ethernet cable. In 2002, CAT6 cables were the first to have a central cross shaped divider that isolated the 4 pairs of isolated copper wires from each other, to eliminate crosstalk. Not only that, the isolated pairs in CAT6 had tighter and shorter twists and some CAT6 cables had an electromagnetic shield under the jacket, which helped reducing the cross-talk and interference even more. Category 6 cables used a 250 MHz frequency to reach the bandwidth of CAT5e cables, 1 Gigabits per second, but they could reach the full distance standard, 100 meters. In some cases, CAT6 cables were used for 10 Gigabit per second networks, but that limited their distance to 55 meters. 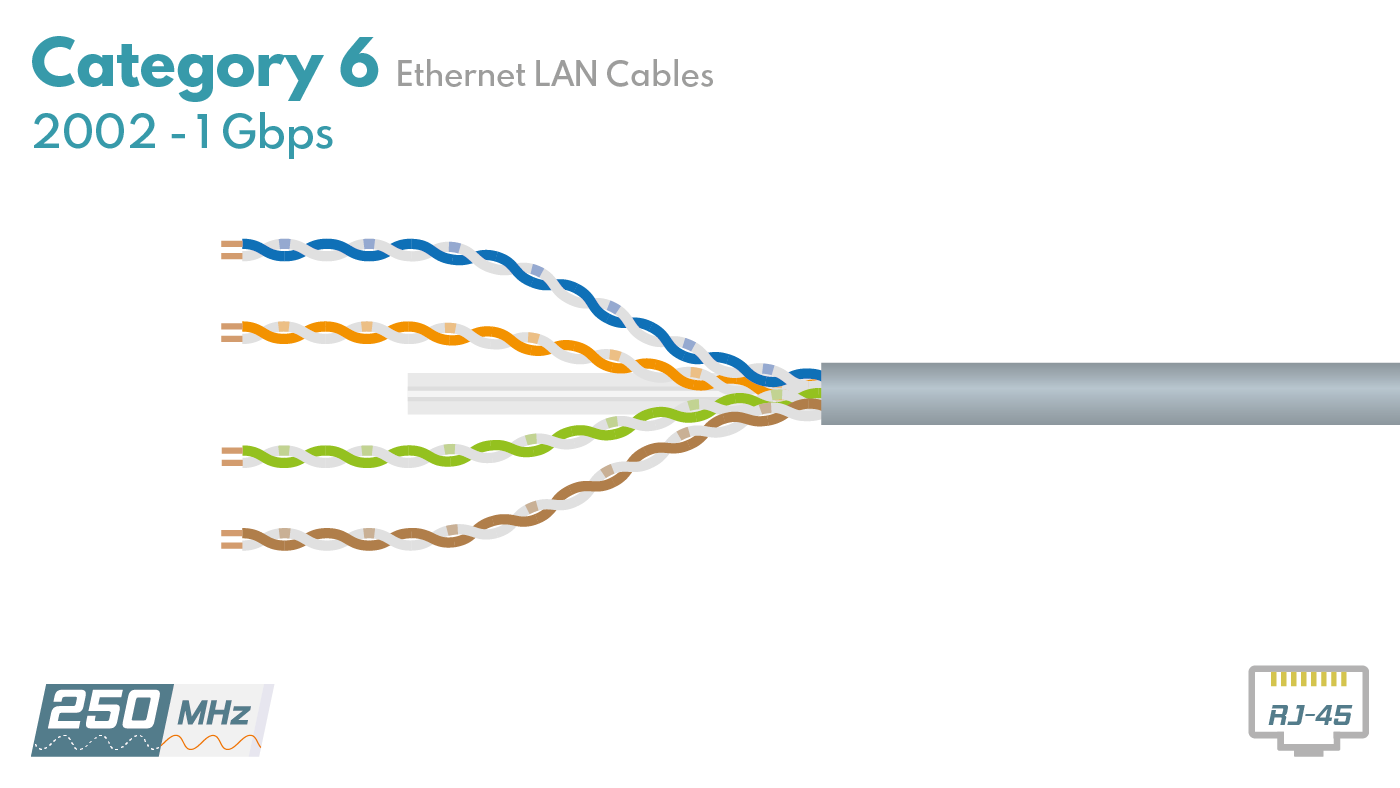 CAT6A was introduced in 2008 as and improved version of CAT6 and it was the first to reach the 10GBase-T
Ethernet standard. It used double the frequency, up to 500 MHz, and it could reach the 100 meters standard even when transferring at a 10 Gigabits per second bandwidth. Augmented Category 6 (CAT6A) cables kept the structure design of the CAT6 and the usage of RJ45 connectors as standard. However, they were commonly used for data center applications rather than office and home networks. 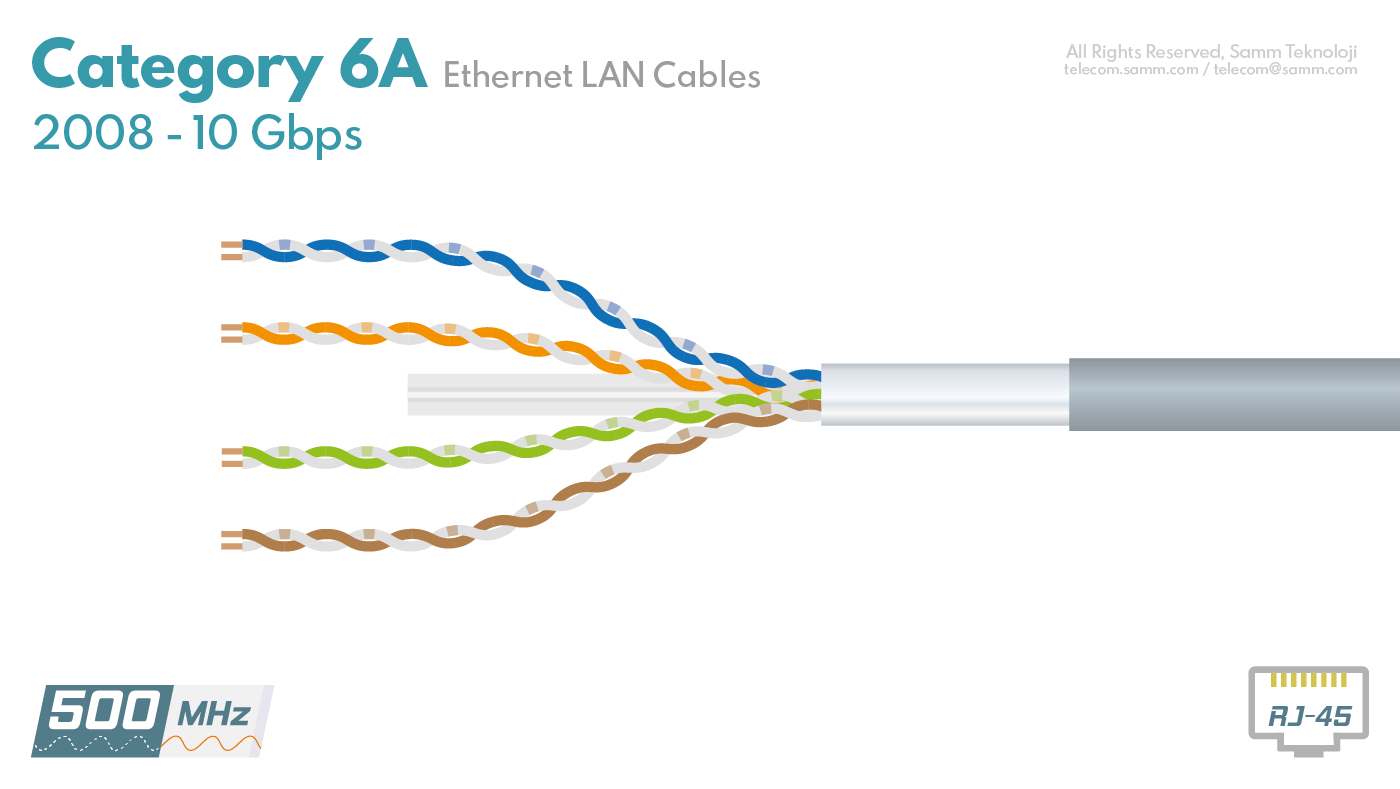 The seventh generation of Ethernet cables, Category 7 (CAT7), is mainly different from CAT6A by making the shielded cable structures mandatory, and it increased the frequency up to 600 MHz. Category 7 cables, which were introduced in 2010, also had a mandatory inner shield around each twisted pair, in addition to the center cross shaped divider. CAT7 cables maintained the 10GBase-T
Ethernet standard, which is 10 Gigabits per second bandwidth along a 100 meters cable. However, they were the first generation to start utilizing additional connectors, like ARJ45, GG45 and TERA, but they maintained the RJ45 compatibility. Like CAT6A cables CAT7 cables can be used at home or at the office but they are mainly used in data center and professional environments. 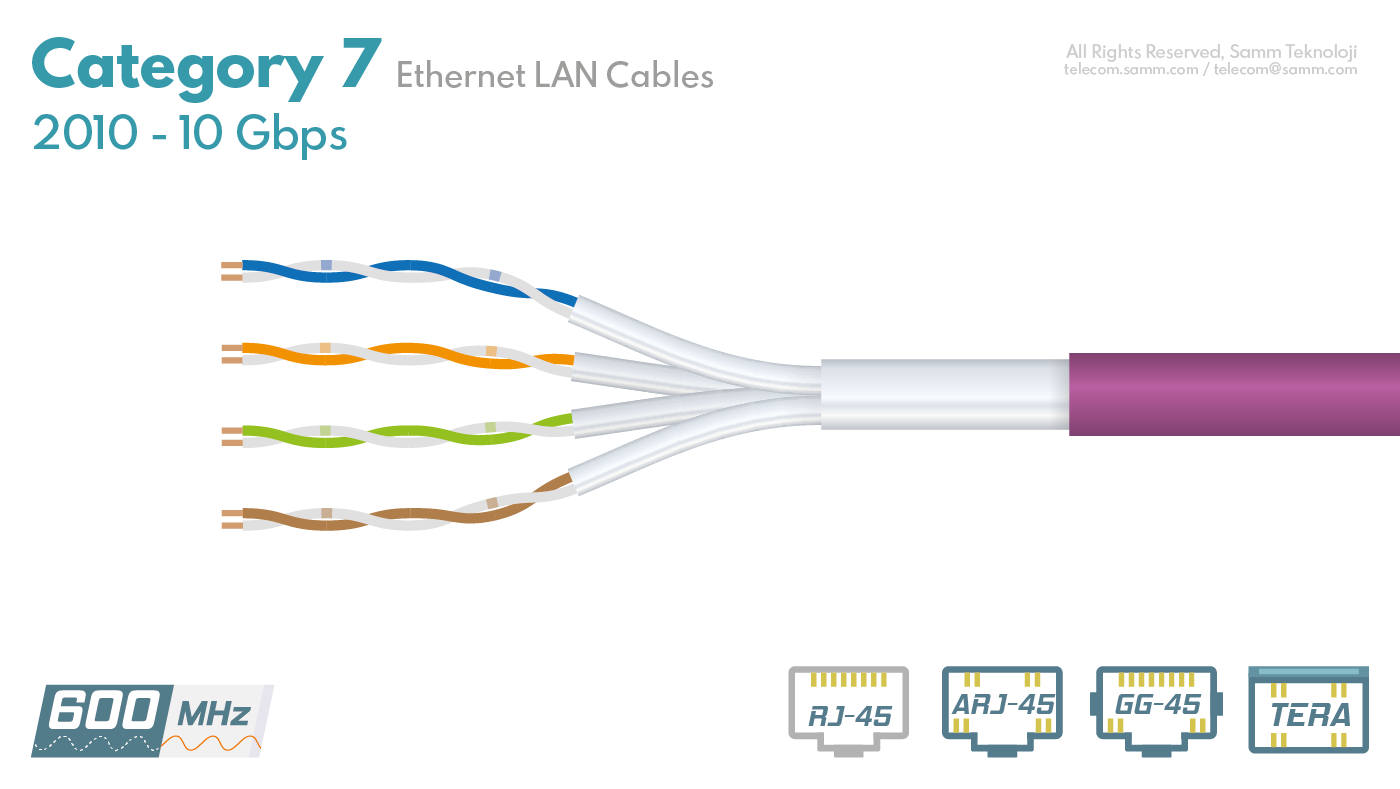 The CAT7A standards is an enhanced version of CAT7. Augmented Category 7 (CAT7A) cables have a high frequency that reach 1000 or 1200 MHz, which allows them to transfer data up to 40 Gigabits per second for up to 55 meters. In some cases, CAT7A cables are used to for 100 Gigabits for second connections, but only up to 15 meters. Just like its predecessor, CAT7A standard is compatible with RJ45, ARJ45, GG45 and TERA connectors. Because of that, it is mostly used and data centers and professional applications. 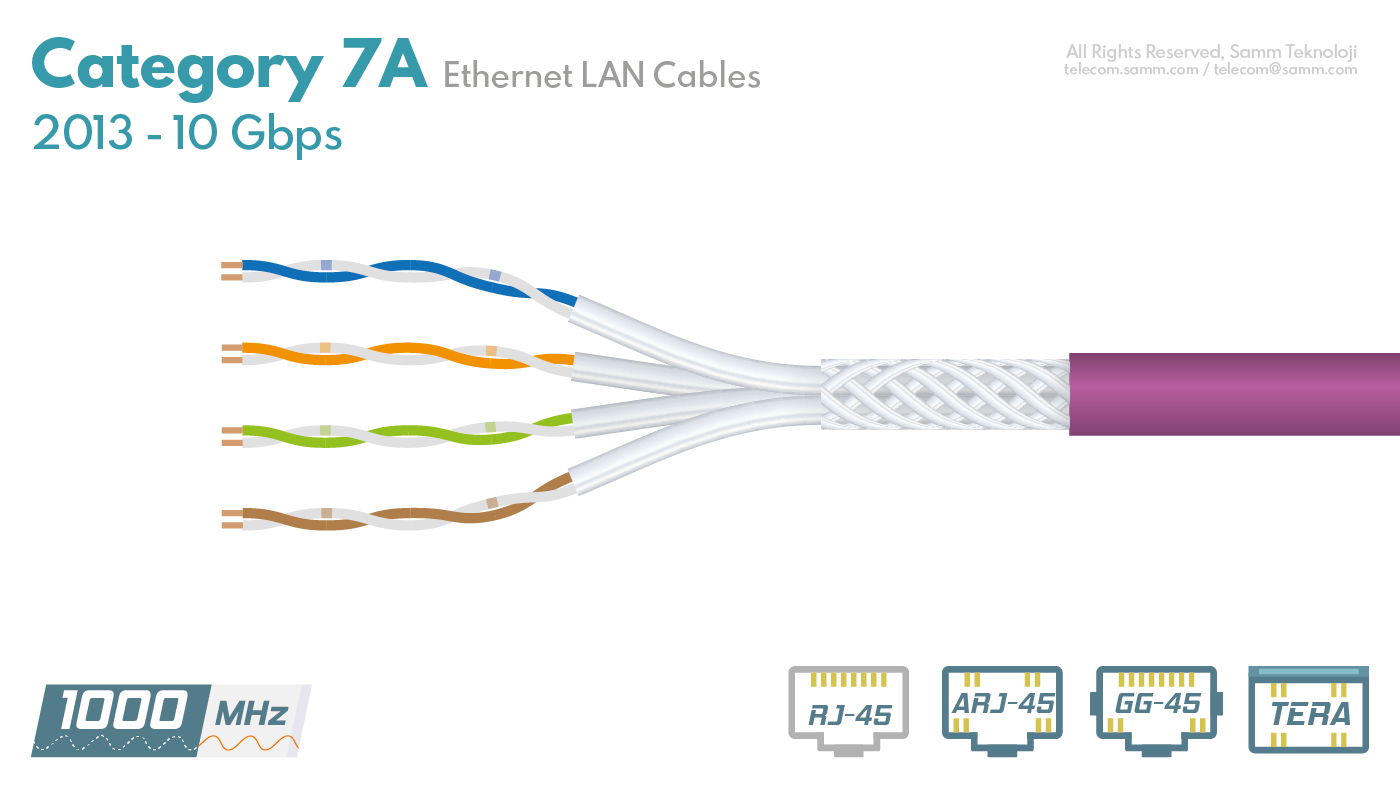 On the first hand, CAT8.1 standard was first introduced in 2016, it was called CAT8 back then. It was the first Ethernet cable able to transfer up to 25 Gigabits per second over 100 meters. CAT8.1 can also transfer 40 Gigabits for second but only up to 33 meters. CAT8.1 cable can be terminated with RJ45, ARJ45, GG45 or TERA connectors and they can be used for home and office networks or in data centers and professional applications. 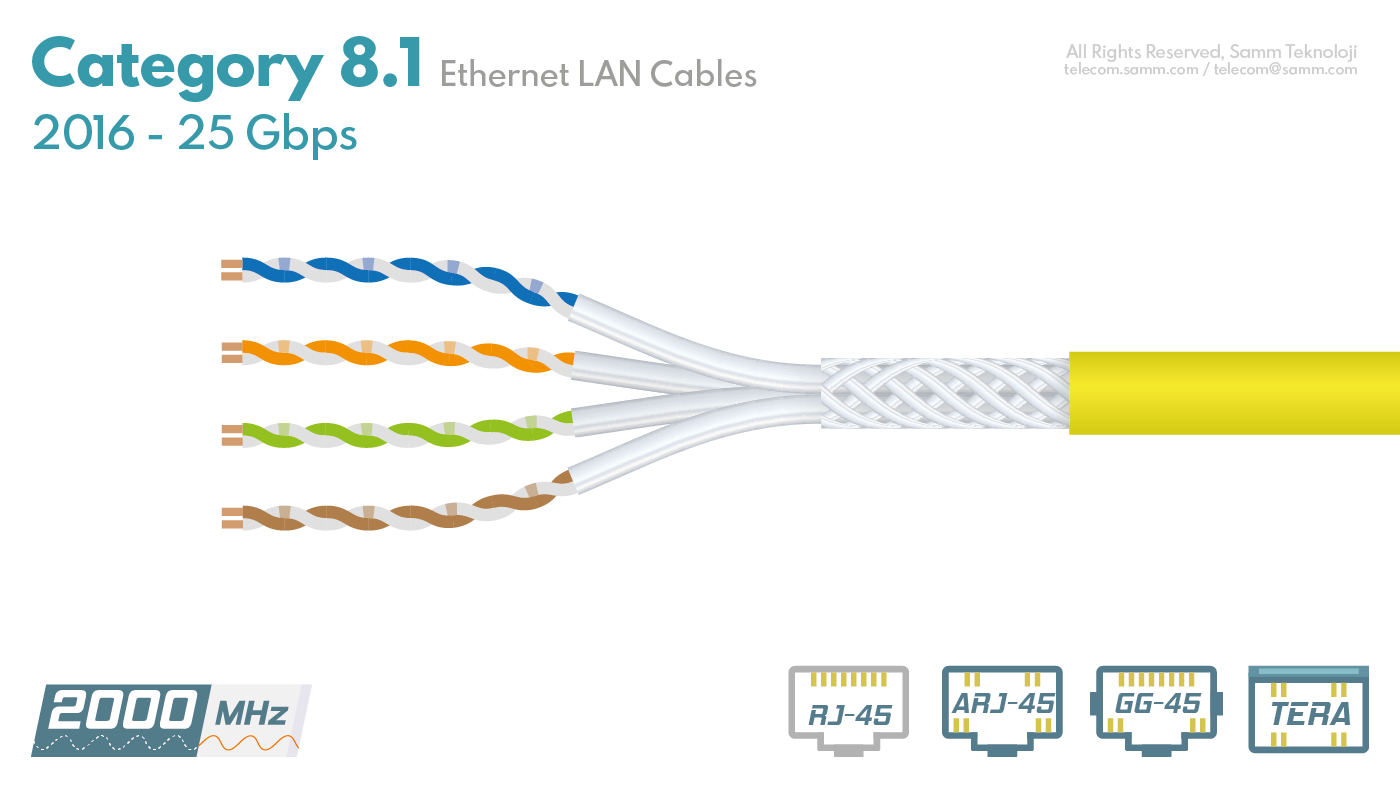 On the second hand, CAT8.2 cables use the same 2000 MHz frequency, but they are used for 40GBase-T
Ethernet connections. Which means, CAT8.2 cable can transfer data at a speed of 40 Gigabits per second, and up to 100 meters. In addition, the other significant difference of CAT8.2 cables is they ditched the RJ45 connector and can only be terminated by ARJ45, GG45 and TERA connectors. Thus, CAT8.2 cable are particularly used for data center and professional applications. 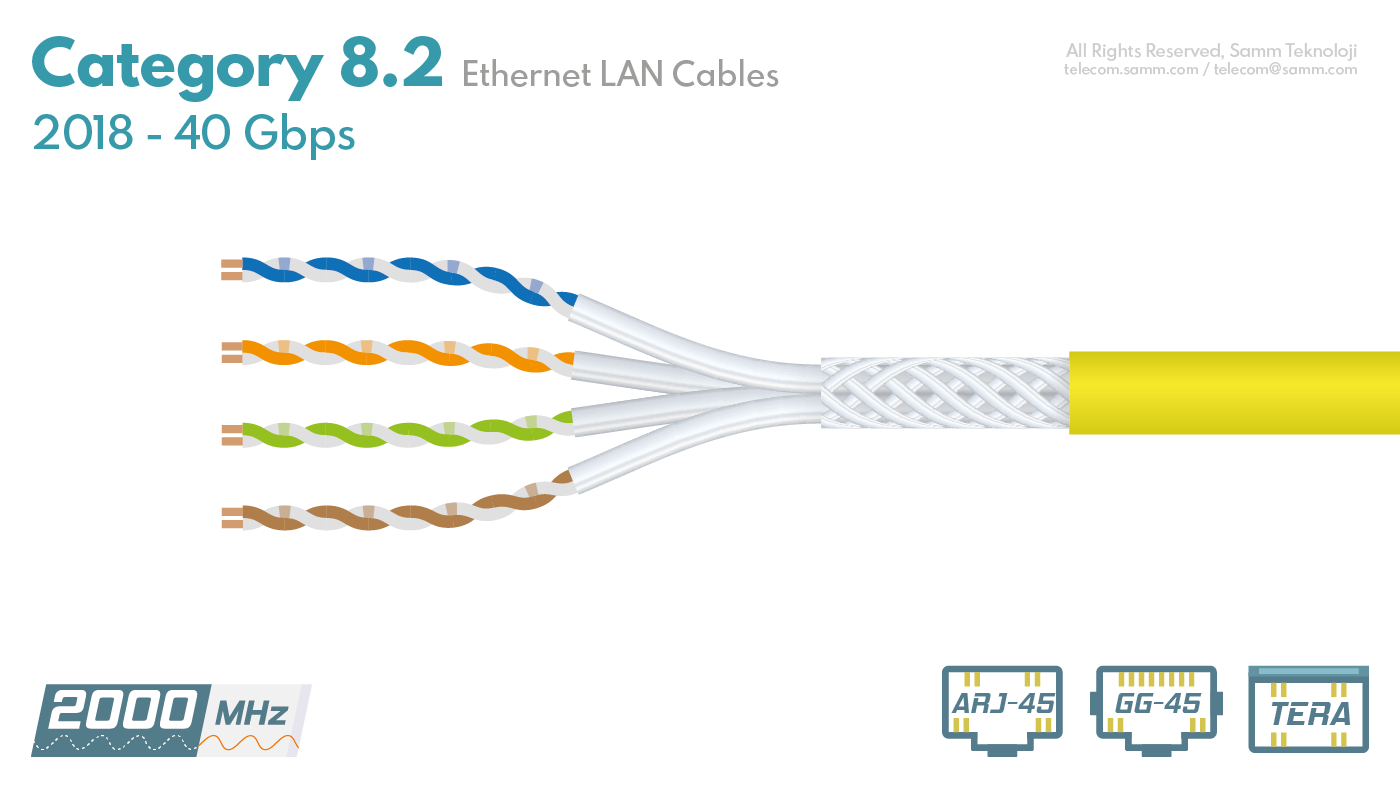 Being a Turkish fiber optic cable manufacturer and an efficient supplier for Europe, Asia and America, SAMM Teknoloji joined the global market with very high potential. SAMM designs and manufactures a wide variety of fiber optic cable types optimized for fixed or mobile networks that can be used in indoor and outdoor environments. SAMM offers reliable, cost-effective optical products to meet the needs of customers with innovative products developed and tested in accordance with international standards.